This mini-series of small articles will present you successively:

This fifth article looks at what we can expect from battery improvements, different architectures from the more electrical aircraft to the all-electrical aircraft, and exciting designs made possible with electrical engines, in particular distributed electric power.

Considering all the efforts put in batteries, driven by the automobile industry, is there hope that the progress curve leads us to viable solutions for aircraft?

Unfortunately, the same research paper from Martin Hepperle at the German Aerospace Center shows that even though we can expect significant battery technology progress, they will remain insufficient for commercial aviation. 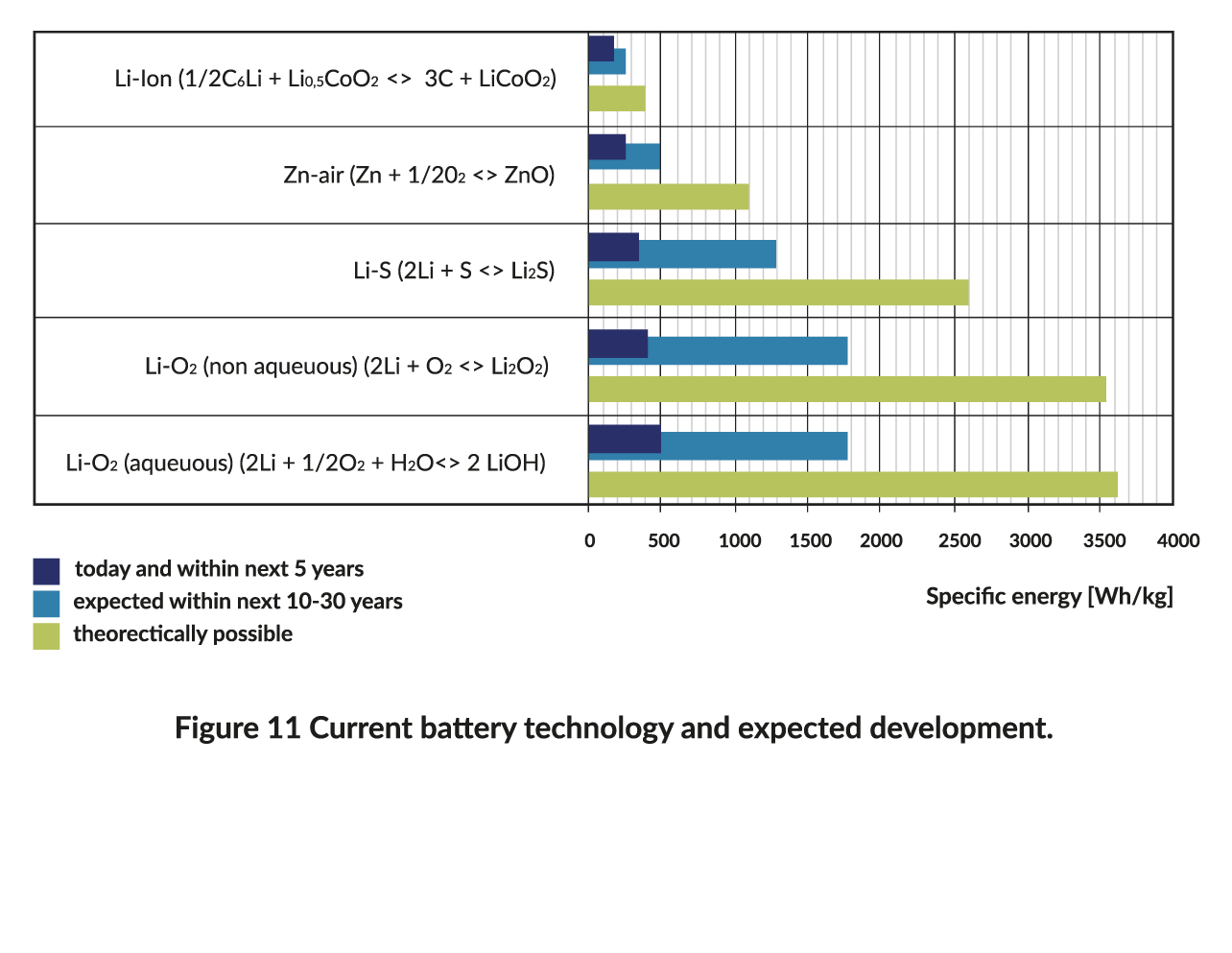 This figure shows where we stand today in terms of energy density per mass with the current Li-Ion batteries, the progress we can expect in the next 5 years, the next 10-20 years, and the theoretical limit.

There is a lot of promising research for batteries. Still, even the technology that has the most potential (Li-02) is not expected to yield more than an x7 improvement compared to current Li-Ion technology in the next 10-20 years. Beyond this timeframe, its theoretical progress would still be capped at x14.

That is great and very promising for cars or even trucks but falls short of the x60 improvement required for medium-haul commercial aircraft. And we have not even mentioned the time it would take to refill the batteries (even though we could imagine quick battery swaps, for that matter).

From the more electrical aircraft to the hybrid aircraft

Does that mean that electricity is not part of the future carbon-neutral aircraft? Not at all.

Modern aircraft, starting with the B787, have become what we call “more electrical aircraft.” They use batteries to power the onboard systems, which led to significant improvement in weight reductions.

Now, what about the power train?

There certainly is interest there because electrical engines are much more efficient than combustion ones. This diagram shows that an electrical power train can be twice as efficient as a conventional aviation power train. 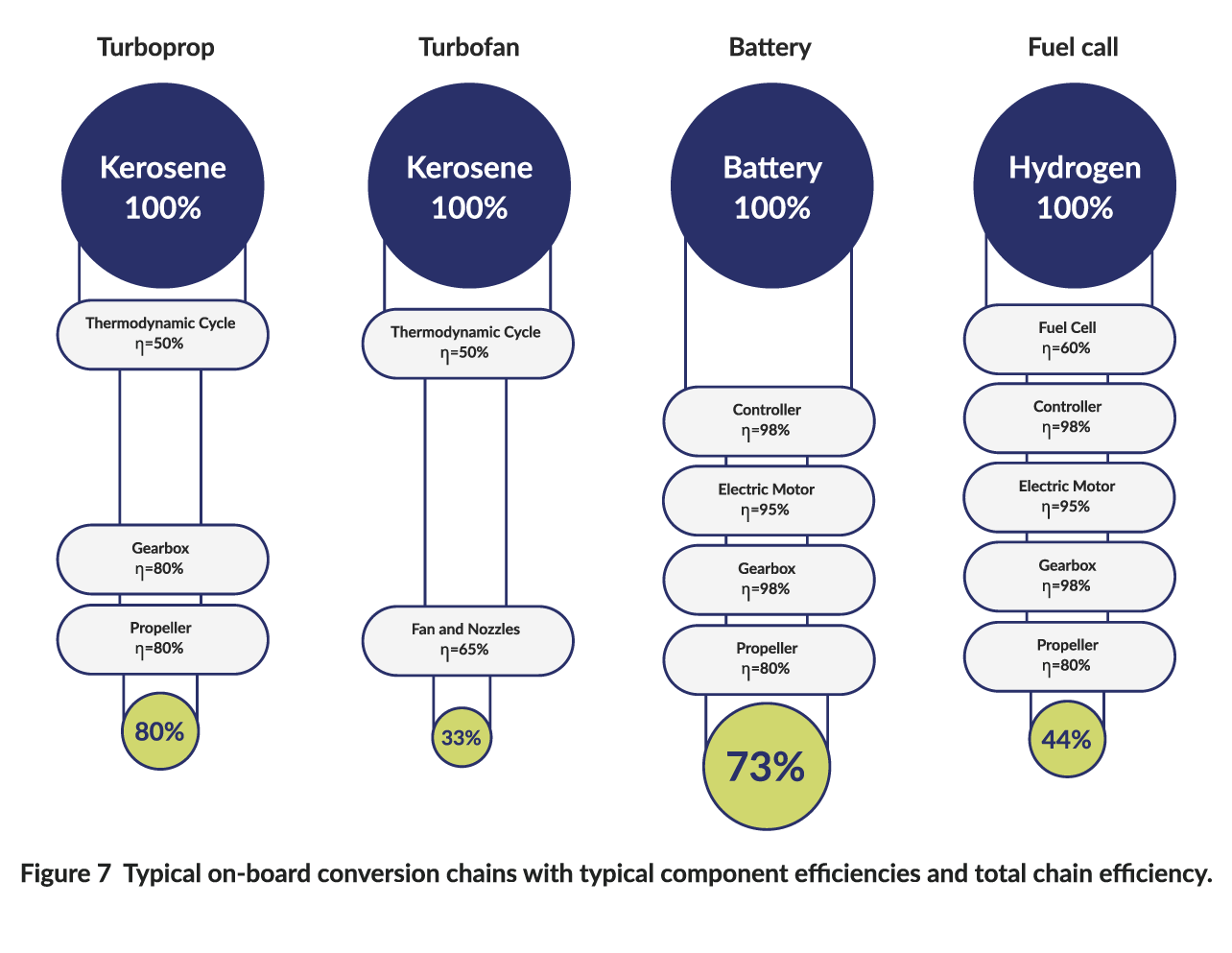 Hence the idea to introduce hybrid models where aircraft would have combustion engines and electrical engines.

This can be interesting because it’s hard to optimize an engine for all phases of flight: the power required at take-off is very different from the power needed during the cruise. The atmosphere (that impacts engine efficiency) is also very different at ground level and very high altitude. In the end, the jet engine’s performance is a smart balance between all these constraints.

But what if we could use two types of engines during the flight or complement one engine’s power with another one during take-off?

The increase in efficiency could outweigh the penalty due to the increased weight.

That’s the idea behind hybrid aircraft. 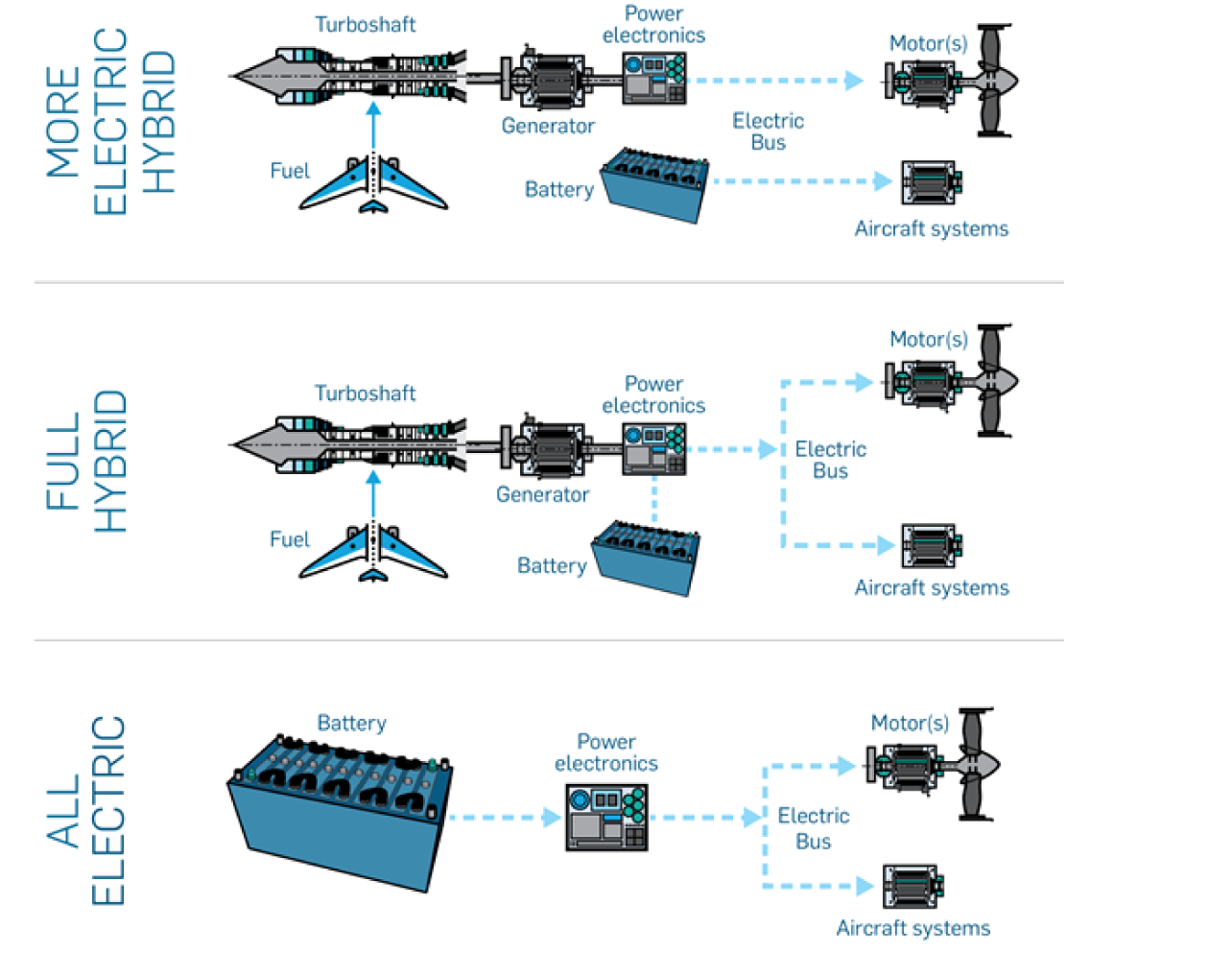 The more electric hybrid aircraft uses a conventional engine that also powers an electrical motor through a generator. In this architecture, batteries are only used to power aircraft systems.

In the full hybrid aircraft, batteries are also used to power the electrical engines. This requires more powerful batteries, but it allows to store extra energy from the main engine when possible and to use this energy at the right time to bring supplemental power to the electrical engine.

Of course, in these hybrid architectures, CO2 is still emitted because electricity is generated from kerosene combustion, but the power train’s overall efficiency can be greatly improved.

VoltAero is a French company developed by former Airbus E-Fan program manager Jean Botti. They flew a demonstrator in October 2020, and their project aims at developing a hybrid aircraft that could transport 6 to10 persons on a range of up to 1,200 km. It will combine a combustion engine with three electrical engines. Short missions could be performed using only the electrical engines, while longer missions would use the combustion engine as range extender. VoltAero argues that the dual power train also adds safety by providing additional redundancy. 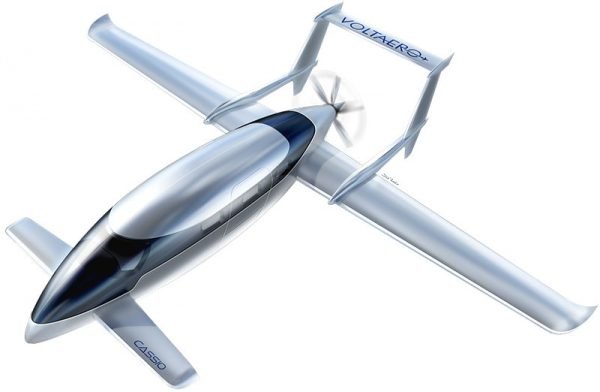 The Cassio hybrid airplane from VoltAero

What about the all-electrical aircraft, i.e., an aircraft that would be entirely powered by electricity?

These aircraft already exist and have a commercial future.

In June 2020, EASA certified the first all-electric aircraft: the Pipistrel Velis Electro from Slovenia. Its endurance is sufficient for typical training flights (50 min), and the time to recharge the battery matches the time for debriefing and briefing with the instructor between two flights. 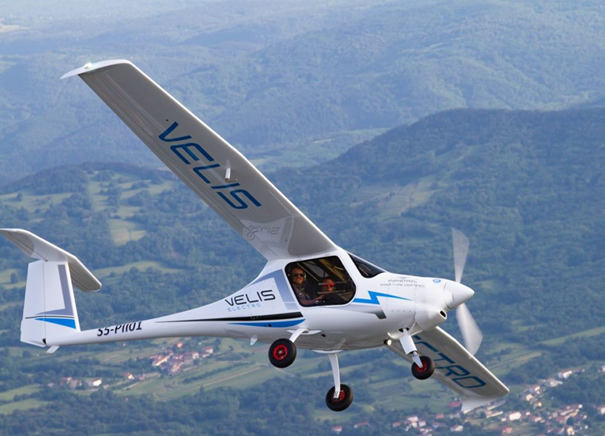 With simplified maintenance and reduced ownership costs, there is no doubt that full electric aircraft will be common for future aviation training.

If the all-electrical aircraft seems to be limited to small capacity and short-haul missions, commercial aircraft might see attractive benefits in adding (many) electric engines to their designs.

Onera, the French aerospace lab, developed a virtual “digital aircraft” called Ampere. It is a hybrid aircraft supposed to fly 6 persons on a 500km range. It uses the concept of distributed electric power. 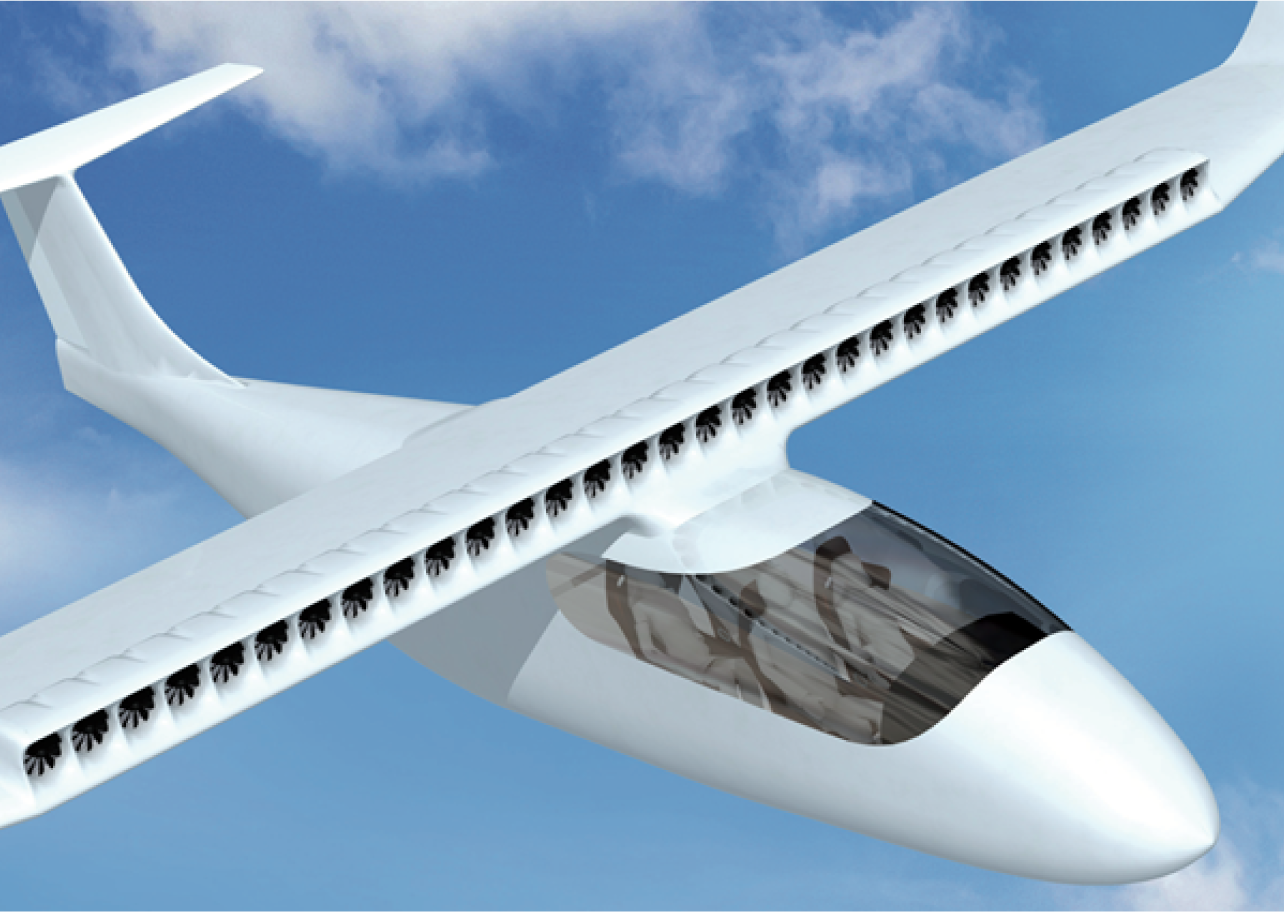 By distributing 32 small electrical engines on the wing itself, this design brings many benefits: improved aerodynamics by ingestion of the boundary layer by the engines located on the wing, improved flight control by shifting differential thrust, improved safety by pooling functions, and better sizing of the engines (no need to design an engine that must be able to carry a take-off by itself in case of engine failure). 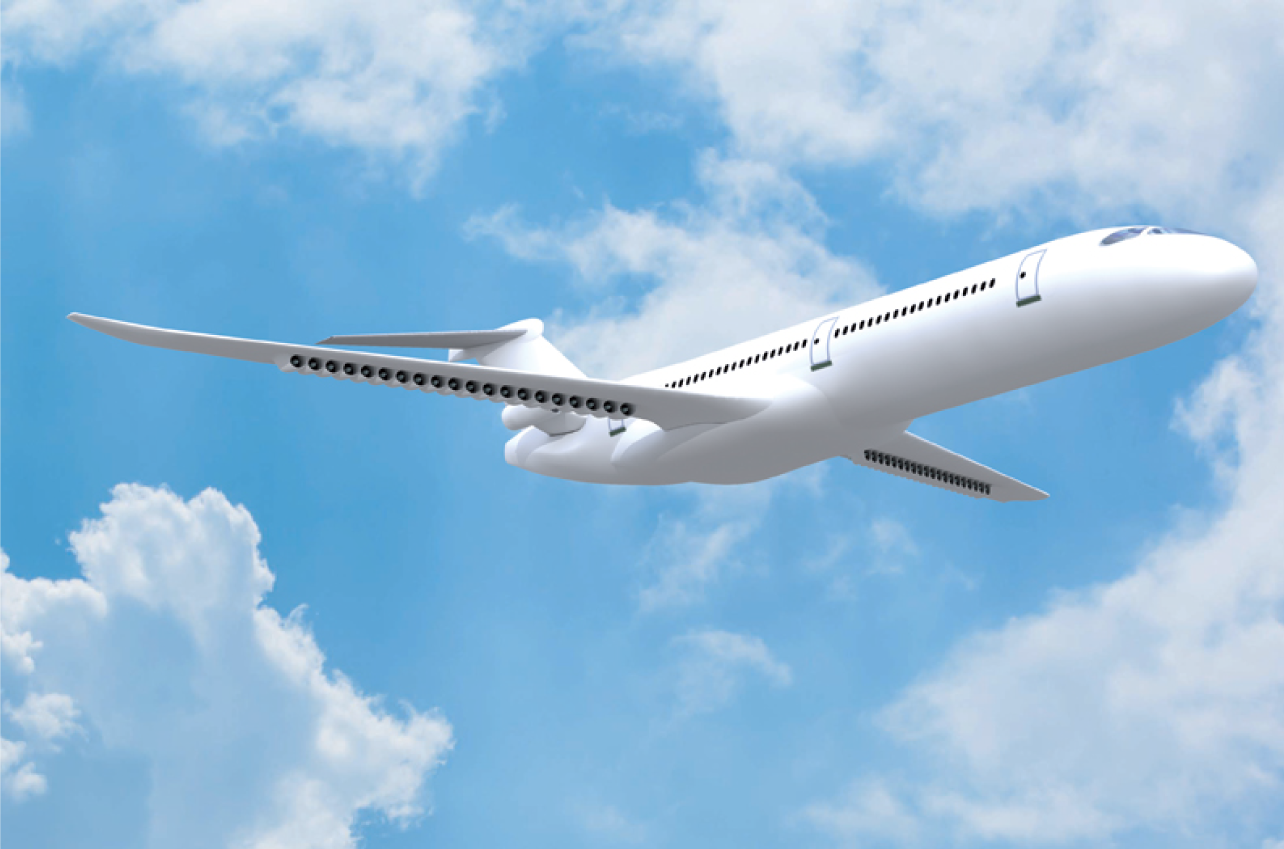 A tribute to Solar Impulse

This aircraft, Solar Impulse, the dream made a reality by Bertrand Piccard, managed to fly around the Earth in 2015-2016 using just the energy from the Sun. 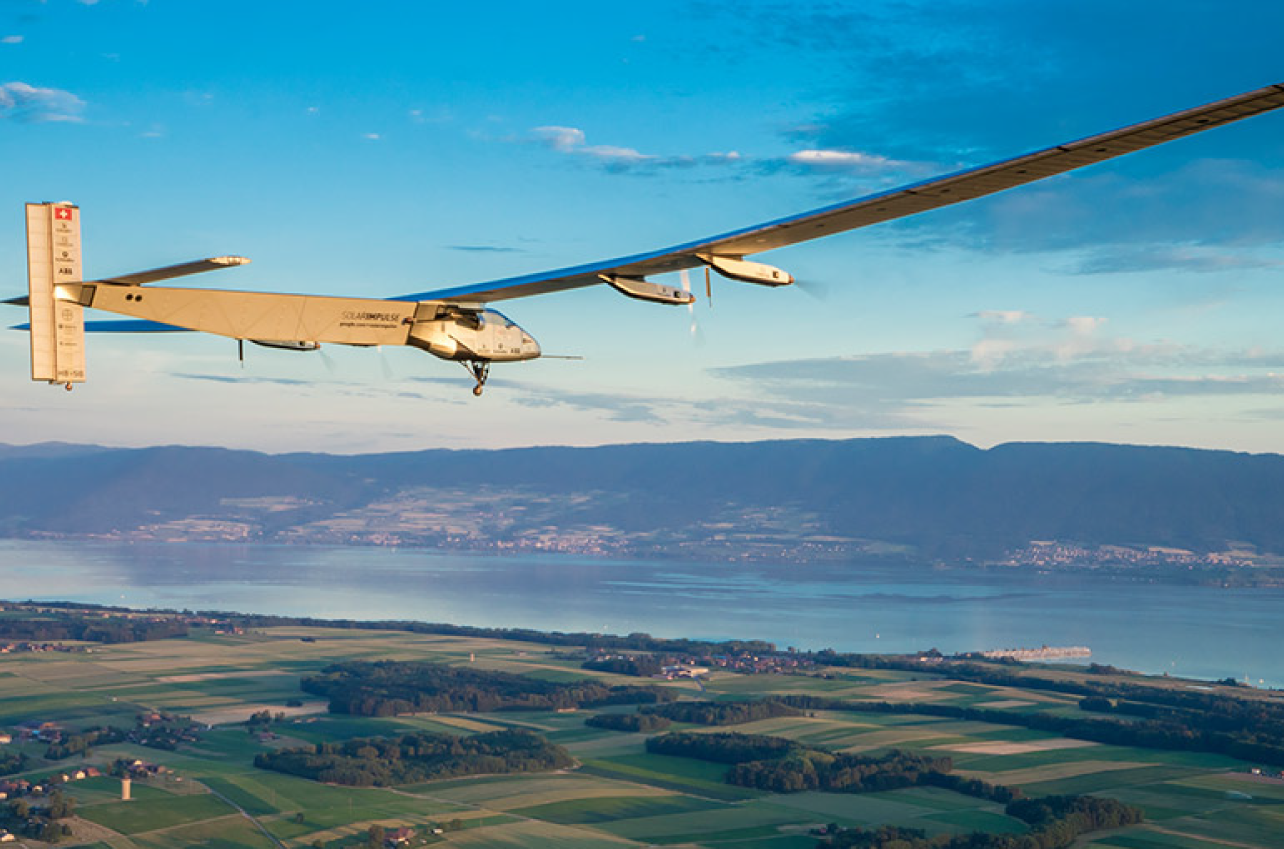 This wonderful adventure and the message that the Solar Impulse Foundations carries around the world by promoting the adoption of profitable solutions to protect the environment is a wonderful inspiration for everybody that is concerned by the future of our planet Earth.

What’s up in the next episode?

The next episode of this series is entitled “The hydrogen aircraft.”

It will address the following topics:

Discover the first articles of this mini-series: 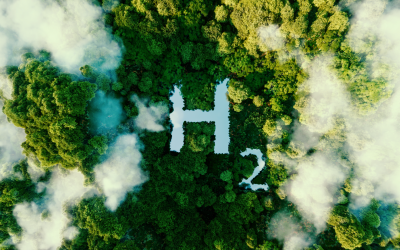 The hydrogen aircraft  This mini-series of small articles will present you successively: How much CO2 does aviation emit, and how it compares with other sectors? Why is aviation so scrutinized? Growth and other warming effects Aviation track record and roadmap... 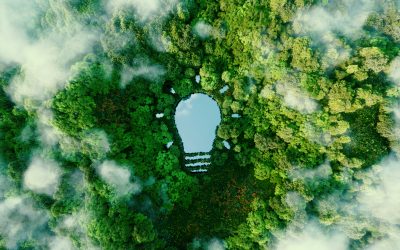 This mini-series of small articles will present you successively: How much CO2 does aviation emit, and how it compares with other sectors? Why is aviation so scrutinized? Growth and other warming effects Aviation track record and roadmap The challenges of alternative... 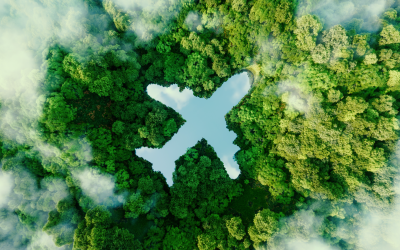 Do you like this article?
Join us on social media!

Join us and be part of the adventure! Show the world your commitment and help us grow the movement! Become a member